I'm standing in the 9th floor of a masterpiece of Stalinist architecture at Strausberger Platz in Berlin. If there were a window in this space, I'm sure I would have a great view. It's an unusually hot day and I have the discomforting feeling that I am breathing only the exhaust of the hundreds of others passing through the tiny floor-landings where 14 galleries (seven from Berlin, each with a partner invited from another city) have put up a one day exhibition. 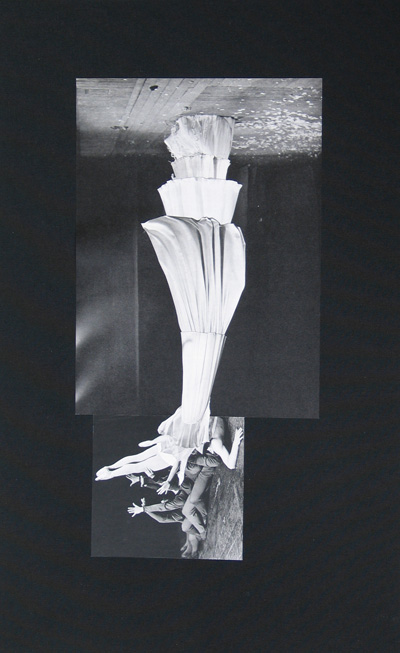 I widen my focus to see the whole of this mash-up installation. Although the works of at least 6 artists are involved, at first glance it could be just a mad and mysterious collection of found and altered objects compiled by one artist. But that is not the case. It's rather the compilation of one gallerist, Sandra Bürgel.

The centerpiece of the installation is a pair of badly maimed mattresses by Klaus Winichner, one still in plastic wrapping, both cut open, insides exposed, spray foam and other litter (including a book) inserted into their depths. They are flanked on both sides by gently curved rows of pictures, artists' books and objects, which extend like wings across the floor. Every object has been obviously placed with care. 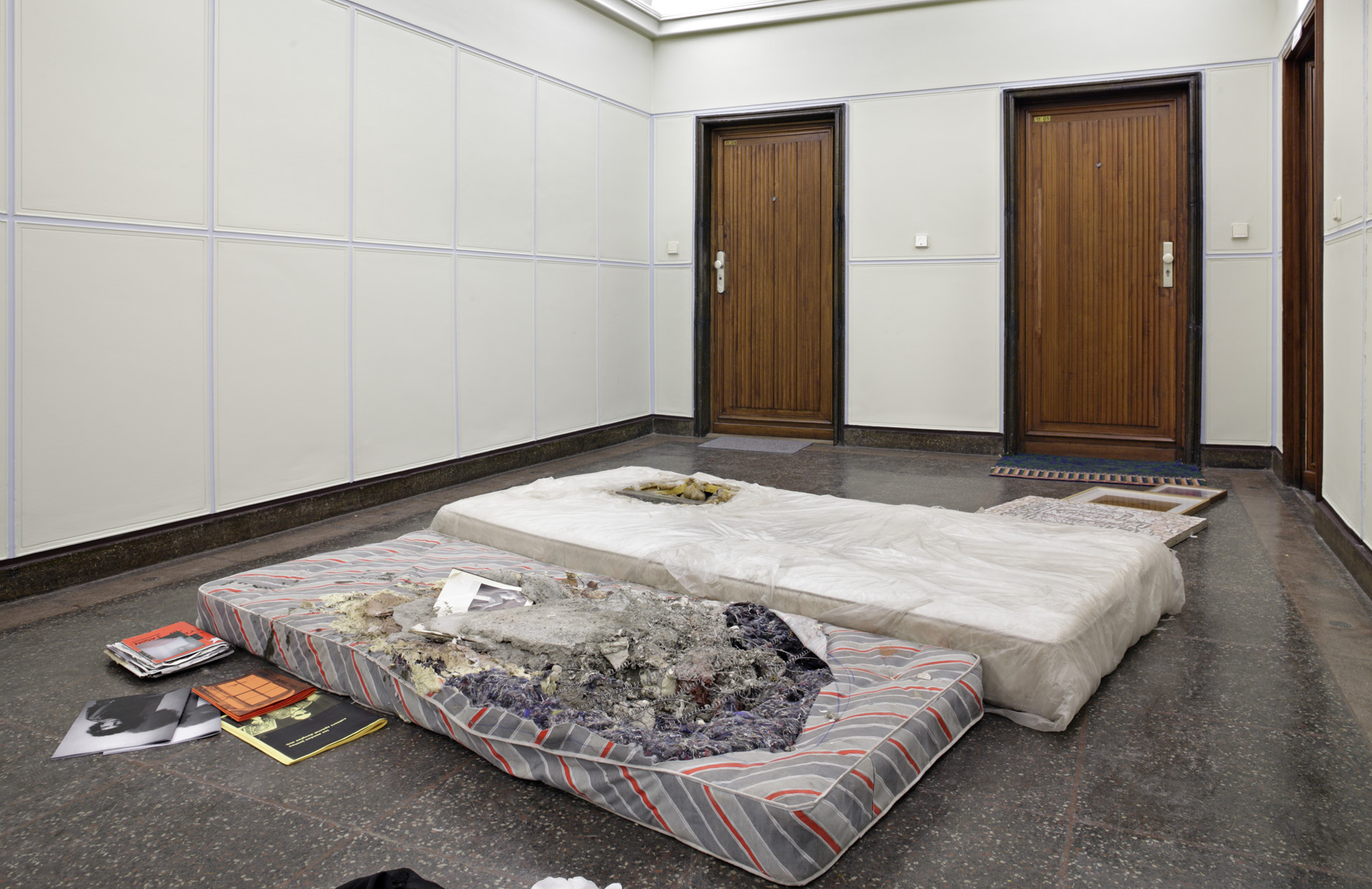 I immediately recall an enormous spray-painted slogan on a banner hanging from someone's balcony overlooking a construction site, which I passsed on the way here: "Räume für Alpträume". It's an amusing play on words meaning "Spaces for Nightmares", which certainly has more to do with land development politics and practice in Berlin than art exhibitions.... but maybe that is also not the case.

It's not that the works in themselves are necessarily nightmarish. In fact, no one adjective could be used fittingly in describing each and every one of the works. But many of them could easily have been pulled from someone's most haunting nightmare. There are the disorienting spaces and bodies in Raphael Danke's collages - flat where depth should be and deep where flatness is expected. And there are the mysterious, mildly trashy yet also very beautiful assemblages of Franziska Cordes - I can imagine a long story behind each one. And then there are the silent floating forms in Martina Heinz's untitled set of three photos - as if they were resolutely containing an unspeakable truth. There is even the shadowy, coppery portrait by Alex Frost - the mental imprint of an image you can't forget. And what about those mattresses?

This entire grouping of works not only engages and provokes my imagination but also demands that I look closer to see what is really there. And on closer inspection, I am not disappointed, for I find far more questions to answer than statements to react to.

Upon arrival at Galerie Sandra Bürgel, I am greeted by a shocking panorama of two and three dimensional forms, painted over monochrome in an inexplicable palette of colors. This is "Wir Verbessern Ihre Arbeit" (We Improve Your Work), "an empirical show about artistc ego and imposed value judgements" by Instituto Divorciado. The improvement, I understand immediately, has been to simply paint over every piece submitted for improvement. Olive Green, Mauve, Royal Blue, Chartreuse, Burgundy, Deep Violet, Goldenrod, Dark Teal, Sunny Yellow, Bright Blue, Black, Magenta, Warm Gray, Bubblegum Pink. It seems as if no attempt has been made to adapt to any sort of current aesthetic trends, and that everything from the choice of colors to the placement of the objects in space is completely arbitrary. This hanging is most definitely maximalist, but on closer inspection, I see that it can't rightfully be called arbitrary. As I move from the front room into the second, I notice a letter-sized paper hanging on the wall, a key linking artist names with colors.

Yes, on the outset the idea seemed a simple but brilliant one, brilliant in its simplicity and in its audacity: to invite a lot of artists to submit a work for the show, with the knowledge that it would be "improved" before its exhibition. From a curatorial standpoint, this is genius. It pointedly draws into question contemporary practices of curatorial authority. Isn't it an improvement of sorts that curators attempt to achieve in finding ways to hang and create relations between disparate works, whilst contextualizing them in a theoretical framework?

The question is thus posed: What is improvement? Is simply the touch of a second artistic hand sufficient to categorize the work as improved? While one cannot say with any certainty that these works have been aesthetically improved, their individual values have undergone a 10% increase (improvement?) over the original sale price. And they have entered the context of a larger work, a powerful conceptual field, which may be, in some or all cases, an improved condition.

But by some not uncommonly held standards, one could say that the works have, far from being improved, been destroyed. In the submitted works, nearly all imaginable aspects of so-called individual expression have been erased by the heavy, equalizing coat of paint. Now remaining, and in only some cases, are some traces of muted texture and varying degrees of three-dimensional shape.
It's not that the original state of the submitted works wasn't photographically preserved. In fact, these photographs were not only reproduced in the catalogue, but in an exhibition poster. I was happy to take a smaller free poster which listed the participating artists in a pyramidal shape. As I looked through the "Wir Verbessern Ihre Arbeit" merch, this insistence on the now non-existent original, the haunting photos having been rendered simulacra - I wondered if one of the works in the gallery might just come alive and jump out of its coat of paint.
While this merchandise is clearly having fun with conventions of publicity and the artistic ego, it performs a second function, that of reintroducing the image of the works prior to improvement, reinforcing their status as works of art. The catalogue, however, goes one step further. It makes public a fascinating and sometimes downright funny exchange of communication between Instituto Divorciado and the participating artists regarding their participation. Here we are offered an invaluable insight into the many psychological, theoretical and practical processes involved in selecting and submitting one's own work for "improvement". In this way, the catalogue goes beyond the exhibition itself; it even comes with a CD! - the Exhibition Soundtrack by the Better Beatles, Remixed.

I talked with Sandra Bürgel for some time about "Wir Verbessern Ihre Arbeit", and at the end of the discussion she mentioned something very interesting regarding the disparate reactions of curators and collectors to the exhibition. This is her reconstruction (my translation):

"I don't believe that the theoretical foundation of each particular work, which can still be seen in the photograph of the original, was affected. But the physical interference in the works is, let's say, quite fresh in respect to things like the authority of the object or the untouchability of the work - the question, with what importance a single work of art positions itself in the world (and in the artist's oeuvre). Because of this a few collectors have commented in a rather alienated way about the exhibition. The thought of dispensability or expendability, as easily as it may be formulated, strikes at the very basis of 'collecting'. They would have liked to be presented with two variations and thus to be able to compare the original with the remake."

While it may be tempting to see "Wir Verbessern Ihre Arbeit" as related to remake culture, to remix culture and/or appropriation art, it is precisely the point made here that the originals cease to exist as such through their improvement. Physically, they are, with only some exceptions, irrevocably altered, perhaps even destroyed - the possibility of restoration being questionable - in order to make a derivative work, the exhibition. It's a blow to one of the pillars in the creation and sustaining of value in the art market: the authority of the original. It's a blow only possible because of this authority, because anything like an eternally existing original is still imaginable in so few limited human endeavors. But such blows come and go and don't suffice to explain the iconoclastic nature of this show.

Consider all of the processes of production in which some object, some material is destroyed or irrevocably altered in order to produce something else. In effect, that is exactly what has gone on here. Instituto Divorciado has made an exhibition which is simultaneously a work of art of its own, using works of art as its "raw" material, so to say. But it's more complex than that. Suppose the works had been randomly purchased from a flea market and then painted over - would the exhibition still have been disturbing? Further, supposing the improvement had been a small and simple change which worked with (incorporated) rather than against (suppressed) the original, would the exhibition still have been disturbing? And if Instituto Divorciado had utilized copies rather than originals? It seems that the disturbance stems from the fact that the artists of the original works are still listed as authorial figures participating in the exhibition, that the original state of the "improved" works is photographically preserved and reproduced in the exhibition merch and that this whole thing is conceptually bound in the idea itself of an improvement executed as a radical near-deletion of a work of art either previously seen by its creator as "finished", or otherwise with which the creator considered him or herself "finished".

Once again, it's an exhibition that makes a statement, and a strong one, which simultaneously poses a far greater number of questions. And this is the moment, when I leave a show and my thoughts are running in so many wild and unforseen directions, that I feel I've really seen something. And this is something that one doesn't find so easily.

Out of curiosity, I look back at Sandra Bürgel's text for the press release of 7x2, where I first encountered the gallery over a week ago. This is what I find (my translation):

".. the exhibition "Wir Verbessern Ihre Arbeit" opens on 30 April, questioning the improvability of artworks. In 7x2, complementary measures will be taken toward beautification, or stated differently, a decoration representing prosperity will be carried out"